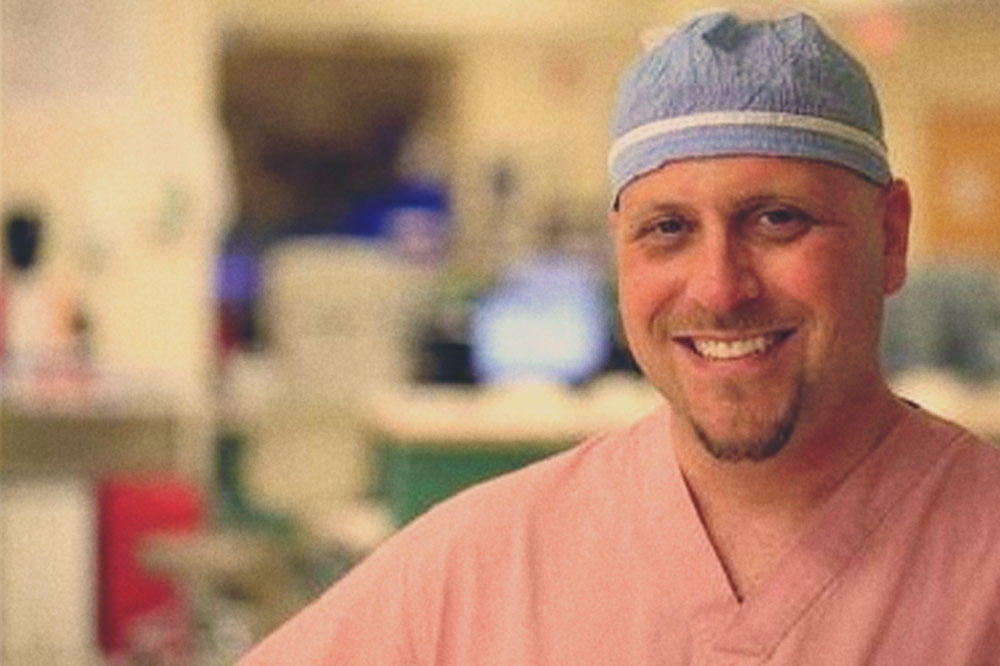 In BLOWBACK, our Ultimate Reader Experience novel for April, terror and weapons with roots in ancient history threaten to devastate life as we know it. My friend Dr. Andrew Dennis’s unique career and experience provide unparalleled context for fans of this book. Dr. Dennis is a board certified trauma surgeon at the world famous Cook County Trauma Unit. He is also a police officer and SWAT surgeon with extensive training in tactical medicine. He founded a training and consulting company to offer law enforcement the tools to prevail when faced with life-threatening injuries, and to improve officer safety overall. Andrew’s life experiences read like pages ripped from BLOWBACK. His insights are fascinating, so let’s dig into the questions.

BRAD: I often say my thriller, BLOWBACK, puts the facts in “faction.” The plot is inspired by two elements of ancient history: the great strategist Hannibal, and the diabolical text, the Arthashastra. When you lecture and teach, you help participants separate fact from fiction. What would surprise people the most about gunshot wounds?

ANDREW: One of the most important tenets I teach revolves around perception. We all watch TV and we have all seen movies. What typically happens when a good guy shoots a bad guy? Most often on TV, that single random center mass shot results in the dispatching of the victim with no more than a single last breath. In reality, that is far more the exception than the norm. When you think about it, a bullet is a small piece of metal that must hit something of critical value in order to take a life. By critical value, I mean it must hit a significant pipe that allows a rapid high volume, high flow blood loss either inside or outside the body. OR, it must hit a high voltage biological power line such as the spinal cord or the brain. With few other exceptions, there is not much that is going to rapidly kill an individual within an hour. Remember, the human body is ultimately a machine that depends on blood supply (plumbing) and nerve impulses (wiring) and bones (structure). If you remember that nature protects all the big pipes and wires by aligning them deep in the core along the bony structure, then you realize just how protected they are and how unlikely they are to be injured by that small piece of flying metal.

I am not saying a bullet cannot kill you, but I am saying that it is fairly uncommon that it does it within seconds and that if you do make it to a trauma center your chances of survival exceed 95% at most institutions. In the meantime, there are simple countermeasures that every individual can use in order to mitigate injury and maximize survival. This is 15minute medicine or medical tactics. It all begins with perception, however. If your mind is compromised then your decisions and actions will also be compromised. Since most individuals’ frames of reference about gunshot wounds come from what they see on TV and in the movies, and since what they see on TV and in the movies is typically inaccurate, then by default their frame of reference is inaccurate. When one starts with an inaccurate perception, one compromises the entire continuum all the way to the overall reaction. By this I simply mean that perception impacts one’s fear, which impacts one’s mindset, which controls one’s physiological response. (Breathing, heart rate, sympathetic response). Together, these all culminate to impact one’s overall reaction, which is defined as one’s decisions and actions. Hence, if perception is incorrect, fear is heightened, mindset is compromised, physiologic response is disproportionate and one’s overall decisions and actions are now compromised. It is a critical relationship that must be counted upon when one trains.

ANDREW: Great question. When you have worked at the Cook County Hospital Trauma Unit as long as I have, there is little that I actually consider odd. Certainly I have seen some unusual presentations to date. They have ranged from an individual presenting with a commercial meat grinder still attached to what remained of his hand, to the not-so-uncommon misplaced objects that have found their way into places for which they were never intended. The actual oddest injury involves a morbidly obese male who was sitting on an office chair. It was one of those chairs with a stellate base with six arms, each with a wheel attached. In this case, as the individual sat down, the chair gave way and the base flipped up on its side and impaled him through his rectum, wheel and all. He presented to the hospital on his stomach with the base of the chair still impaled. Interesting, the strangest place I have ever done a medical procedure was at nine thousand feet while skiing. I was thirteen years old, had no medical license, no medical training and had not even started to shave. My father, an orthopedic surgeon, had injured his knee while skiing and had developed a significant amount of fluid on his knee. The effusion was significant enough that it was causing him an extraordinary amount of pain. We went into the ski patrol shack at the upper mountain, he examined his own knee, taught me how to examine it and instead of accepting the offer of the ski patrol for a ride down the mountain, my father, a tough South Philly raised kid, opted to drain the fluid then and there. The only problem was that he could not do it himself, and the ski patrollers were not qualified to do so, nor would they participate in such an activity. So…. He looked at me, handed me the giant syringe with a giant needle and said you are going to do this. He quickly showed me the landmarks, we both closed our eyes and I impaled him with this horse needle into the side of his knee. I extracted 300 ml of fluid, which relieved his pain dramatically and we continued skiing the remainder of the day.

BRAD: How did you come to peruse a career in trauma surgery and law enforcement, and is one more challenging than the other?

ANDREW: Starting at a very young age, I always went to the ER with my father to see patients. Early on, I was taught to help out. By around age 12 I was applying casts and was the unofficial cast room tech in the ER. When I turned 17 I joined the volunteer fire department in my hometown as an EMT and fire fighter. In college, I worked for the police department and ran the EMS unit. I furthered my career as a paramedic for several other inner city agencies during my graduate and medical education. I knew from an early age, I wanted to go to medical school and that I wanted to be involved with some sort of emergency or trauma medicine. I had several influences in my life, most importantly my father, but also colleagues of his in multiple specialties and eventually colleagues of mine in law enforcement and EMS. To make a long story short, I ended up in a general surgery residency at Midwestern University on the far south side of Chicago. This program was very heavy in trauma training, and I fell in love with it. Law enforcement came back into my life when I was involved in the care of an injured police officer. The other accompanying officers learned of my prior careers and experiences, and asked if I would be interested in getting back into law enforcement as their SWAT surgeon. I told them I was flattered, but as a general surgery resident where I was putting in over 100 hours per week, it just was not possible. Upon the completion of my residency I was offered a fellowship at the Cook County Trauma Unit, one of the most prestigious trauma centers in the world. I was again approached by law enforcement, to consider participating in operations. The time was right, and my chairman was very supportive. During that year, I completed the Illinois police academy, completed basic SWAT, became a member of a local sponsoring police department and began life operating on SWAT as the medical director and as an operator. So began my duel career. Both careers are extremely challenging. I have a deep love and passion for both, and both are deeply rooted in who I am today. Each career carries with it technical, educational and administrative challenges that are more symbiotic than many would think. Both demand focus, both deal with life and death, both require continued commitment to training in skills that are perishable and both require that one put the betterment of others above him or herself.

BRAD: What are 3-5 basic/practical tips that will “Empower to Survive + Train to Prevail” all of my fans?

ANDREW: In “Medical Tactics” we focus on simplifying the concepts of survival and medical countermeasures so that they are understandable and able to be implemented by any and all. I referenced before the importance of distilling the human body to structure, wiring and plumbing. It really is that simple. In order to facilitate such thinking, we use: Breathe… STOP… Move. When dealing with extraordinary circumstances it is imperative to gain control and overcome one’s stress response. The human stress response is somewhat predictable, and there are tricks to overcoming it. The first thing we teach is to learn to slow down one’s heart rate and breathing because gaining control of one’s physiologic response is critical to mastering one’s situation. Hence “Breathe” reminds one to take a deep breath, intentionally slow down one’s breathing via a forced controlled exhale which generates pressure in the chest “valsalva” and puts pressure on the vagus nerve which is the “brakes” to the heart. This slows down the heart rate, more efficiently delivering oxygen with each heartbeat, and allows one to re-focus on his/her circumstances and surroundings. This breaks tunnel vision and auditory exclusion. Next comes the mnemonic “STOP”. In the dynamic situation where circumstances and surroundings are constantly changing, management of injury need not be hard. The priorities remain simple. Security: maintain situational awareness, Treat Bleeding: Apply a pressure dressing or tourniquet to major bleeding that is high volume and high flow. Open Airway: If they are talking, then do nothing, if they are non-responsive, then consider using the nasal airway which stents open the back of the airway keeping the tongue off the back of the throat. Prevent shock: Keep the patient warm, raise the feet to combat gravity and direct blood to the torso and head. Finally, we teach “Move”. This means get off the “x”. Extract yourself or the injured individual using a finite set of pre-learned and pre-practiced carries and drags so that they are built into one’s muscle memory. Keep in mind, practice and drilling mean everything in the face of a stressful situation. If you have pre-scripted it, drilled it, and experienced it, then your likelihood of being able to utilize it in a critical moment is significantly greater.

BRAD: Finally, I have to ask, what is your favorite Brad Thor novel and why?

ANDREW: Foreign Influence, of course….. I am a huge fan of Dr. Dennis Stern! He reminds me of myself. Seriously, I am actually addicted to your books. They are a great means of escape for me. I love the “faction” concept. High intensity characters and stories backed by accurate supporting history and detail.